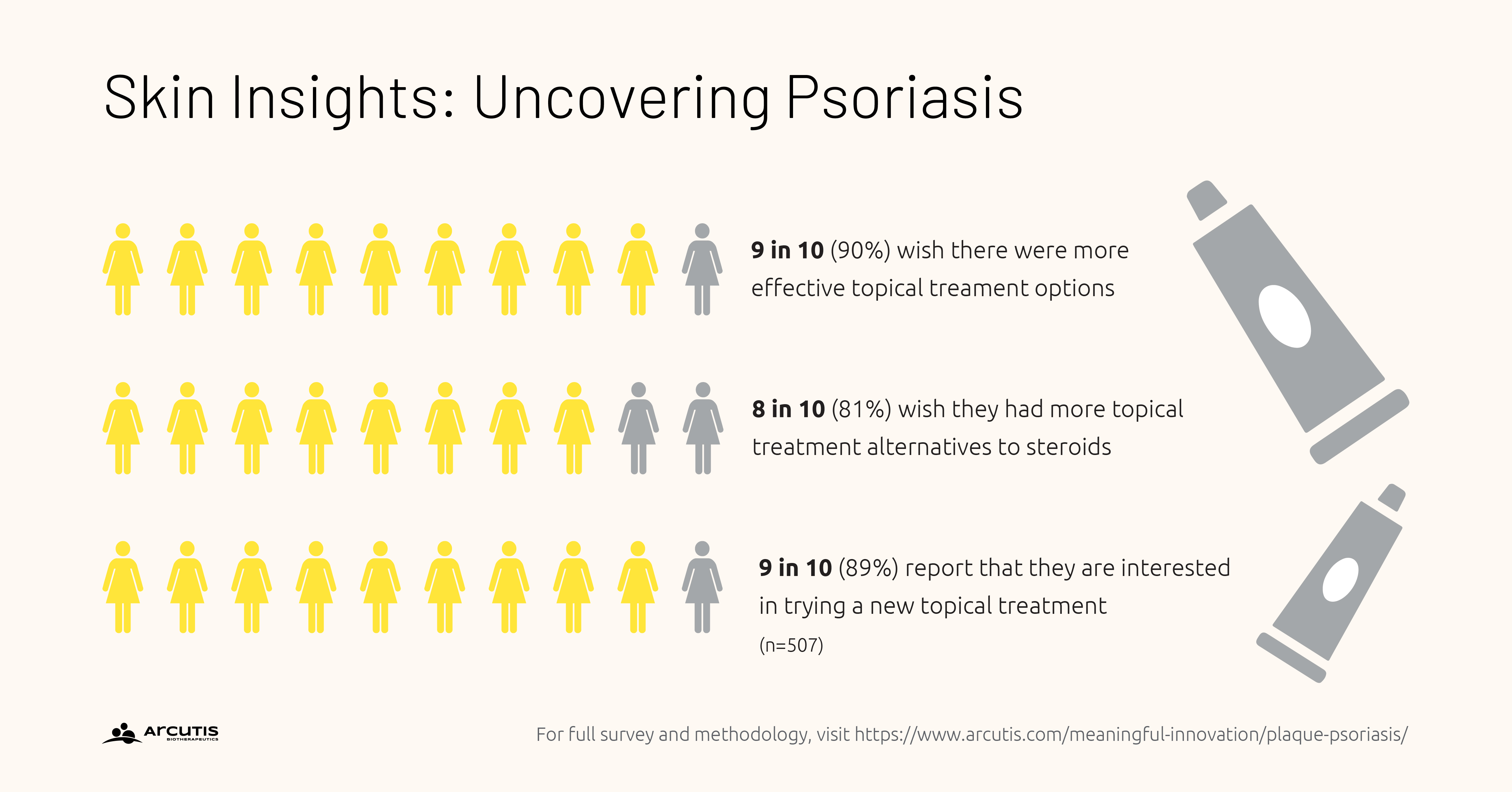 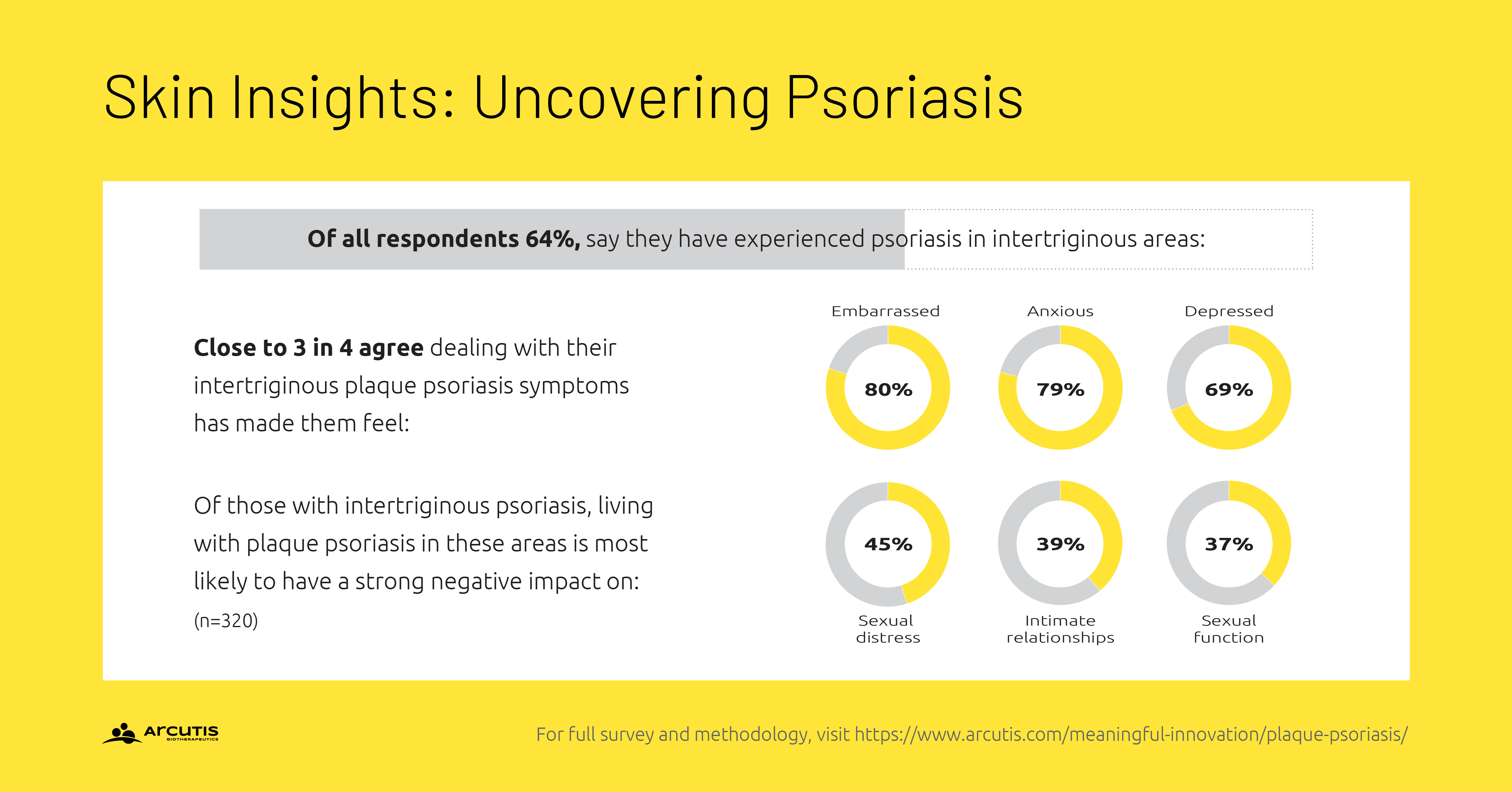 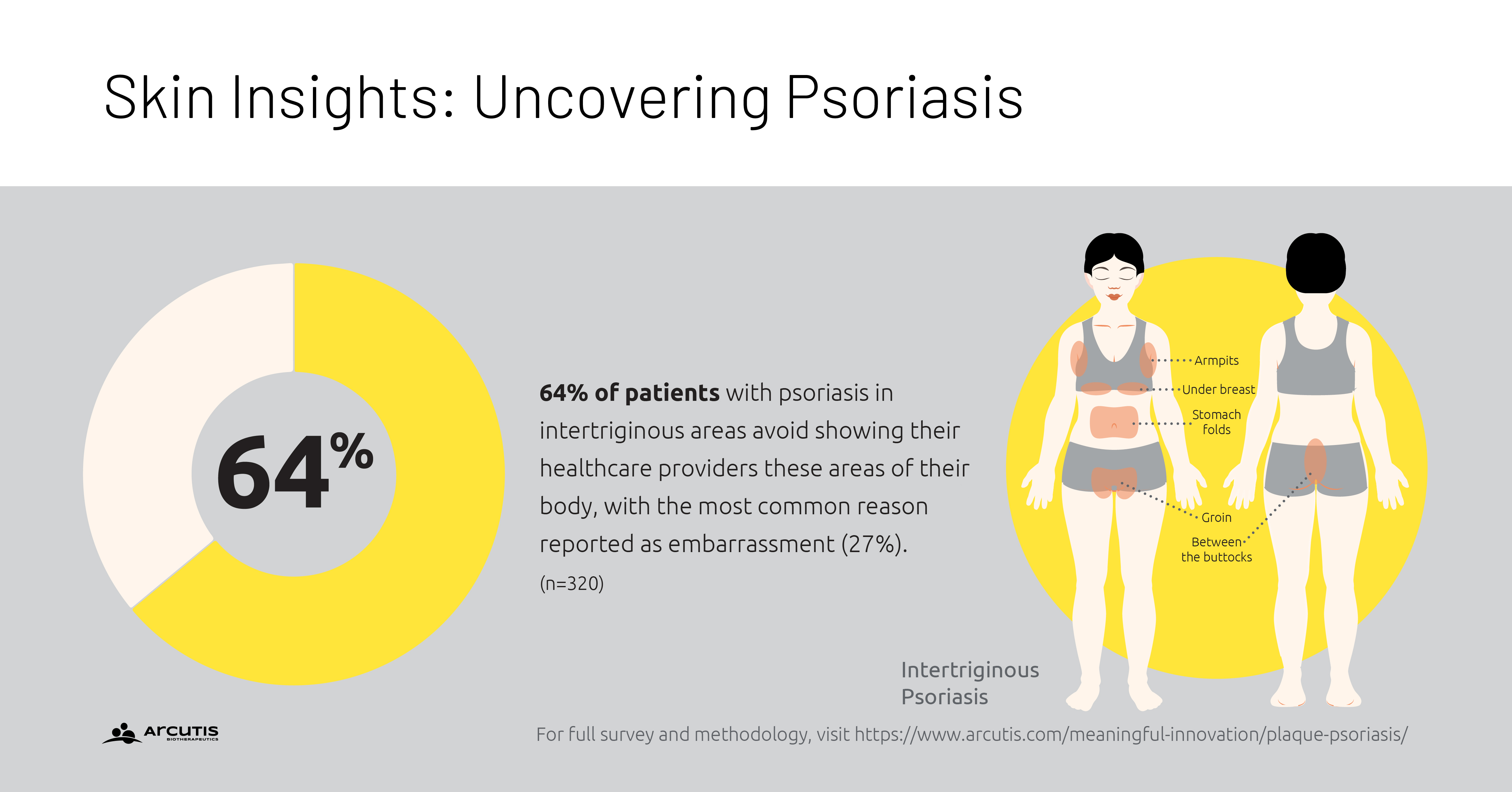 WESTLAKE VILLAGE, Calif., March 22, 2022 (GLOBE NEWSWIRE) -- Arcutis Biotherapeutics, Inc. (Nasdaq: ARQT), a late-stage biopharmaceutical company focused on developing meaningful innovations in immuno-dermatology, today announced findings from the Skin Insights: Uncovering Psoriasis Survey, a national survey of 507 adults 18+ diagnosed with plaque psoriasis who are on topical treatments. The online survey was conducted by The Harris Poll and was designed to reveal insights into the emotional impact of the disease and challenges related to currently available topical treatments.

“The results from this survey illuminate the ongoing difficulties individuals with psoriasis are experiencing with their disease, as well as with their topical treatments,” said Frank Watanabe, President and CEO of Arcutis. “The insights for individuals with intertriginous psoriasis in particular are critical to increasing understanding of the significant negative impact the disease can have on emotional wellbeing, and the factors that may significantly contribute to overall disease burden for those living with psoriasis.”

The survey was conducted among 507 U.S. adults (18+) with psoriasis who use topical treatments but are not on biologics. Of the 507 people surveyed, a subset of 320 respondents reported having psoriasis in intertriginous areas at some point in time. Intertriginous areas include areas of skin-on-skin contact such as the armpits, under the breasts, stomach folds, between the buttocks, and in the groin area.

Individuals living with psoriasis want more effective and simpler to use topical treatment options.
While topical therapy continues to be the standard of care for the vast majority of people living with plaque psoriasis in the United States, there hasn't been an FDA approval for a topical psoriasis therapy with a novel mechanism of action in over 20 years.i When asked about what they wished for when it came to using topical treatments, among all people surveyed:

Additionally, of the respondents with psoriasis in intertriginous areas, 52% said they needed to use different topical treatments for different parts of their body, and described doing so to be time consuming (54%), expensive (40%), and frustrating (38%).

Psoriasis in intertriginous areas can have a profoundly negative emotional and sexual impact.

“Psoriasis in intertriginous areas can be especially challenging for both those living with this condition as well as for their healthcare providers. People are either unaware or embarrassed about their psoriasis in these areas and shy away from showing or discussing their symptoms during an examination,” stated Dr. Teri Greiling, MD, PhD, Associate Professor and Vice-Chair of Dermatology Oregon Health & Science University. “As a result, not only will patients continue to struggle with their physical symptoms, but also often experience psychological and emotional distress due to their condition. These survey results underscore the need for a more open dialogue between patients and their healthcare providers when it comes to the management of psoriasis in intertriginous areas.”

For more information and additional findings from the survey please visit https://www.arcutis.com/meaningful-innovation/plaque-psoriasis/.

About Psoriasis
Psoriasis is a common, non-contagious, immune-mediated skin disease that affects more than 8.6 million people in the United States. The majority of patients develop “plaques,” or raised, red areas of skin covered with a silver or white layer of dead skin cells. Psoriatic plaques are often itchy and sometimes painful, and can appear on any area of the body. Plaques in certain anatomical areas present unique treatment challenges, including the face, elbows and knees, scalp, and intertriginous areas (where two skin areas may touch or rub together.)

About the Harris Poll Survey Methodology
This survey was conducted online by The Harris Poll on behalf of Arcutis Biotherapeutics among U.S. adults 18+ who have been diagnosed with psoriasis by a healthcare provider. The survey was conducted October 21 through November 24, 2021 among 507 plaque psoriasis patients who are on topical treatments but not biologics. Figures were weighted where necessary to bring the data into line with actual proportions in the population using a multi-step weighting process.

Step 1: The initial total opt-in online sample of all US adults age 18+ was weighted to population benchmarks from the March 2020 Current Population Survey. The natural fall-out sample of qualified respondents was 247 out of 9,584 U.S. age 18+ adults.

The variables included in the algorithm for both steps were education, age by gender, race/ethnicity, census region, household size, and marital status. A propensity score variable was also included to adjust for respondents’ propensity to be online. Raked weights were estimated using Random Iterative Method (RIM) weighting. The respondent level weights from Step 2 were used as the final weights.

About Arcutis
Arcutis Biotherapeutics, Inc. (Nasdaq: ARQT) is a medical dermatology company that champions meaningful innovation to address the urgent needs of patients living with immune-mediated dermatological diseases and conditions. With a commitment to solving the most persistent patient challenges in dermatology, Arcutis harnesses our unique dermatology development platform coupled with our dermatology expertise to build differentiated therapies against biologically validated targets. Arcutis’ dermatology development platform includes a robust pipeline with multiple clinical programs for a range of inflammatory dermatological conditions. For more information, visit www.arcutis.com or follow Arcutis on LinkedIn and Twitter.

A PDF accompanying this announcement is available at:

Photos accompanying this announcement are available at: